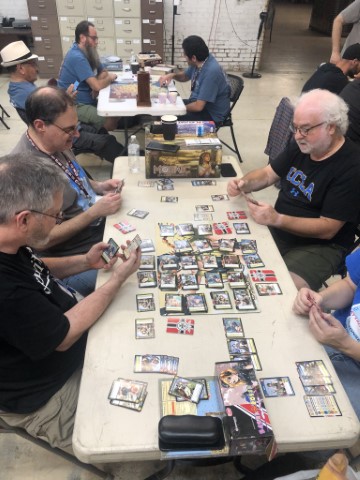 GMT West Weekend at the Warehouse 2022

Weekend at the Warehouse

Eight days later and my grand road trip is over. 24 hours of driving each way through Alberta, British Columbia, Idaho, Washington, Oregon and California.

The convention was very friendly with maybe 150 participants. Many of them were regulars, so there was a real family feeling. Lots of players seeing friends that they only see there, once or twice a year.  A fair number of first timers like myself, but everyone was welcoming and it was easy to find a game.

UPDATE: As a few folks have asked, the games I saw being played the most were Space Corp and Bayonets and Tomahawks. A fair number of Simonitch 4x games, and several games of CC: Medieval.

Here's what I got up to.

Arriving at the warehouse, it's just as you might picture it. An old brick warehouse with plenty of character. Check in with the ladies in the office, then into the gaming space to check things out and claim a table for my first game of the weekend. On my way through the warehouse, folks are playing all sorts of things, but one that caught my eye was a couple guys going oldschool: 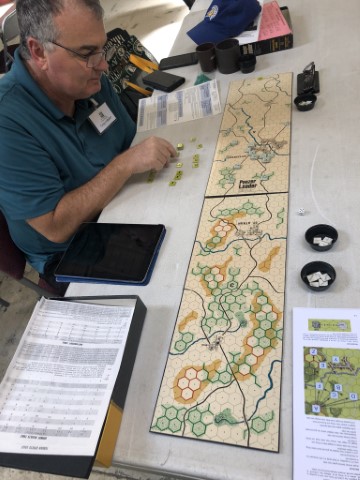 How great to see Panzer Leader on the table! And they played more than one scenario, they were into it.

My first game was with my Blind Swords partner, Will. He wanted to learn The US Civil War, so we played the 1862 scenario: 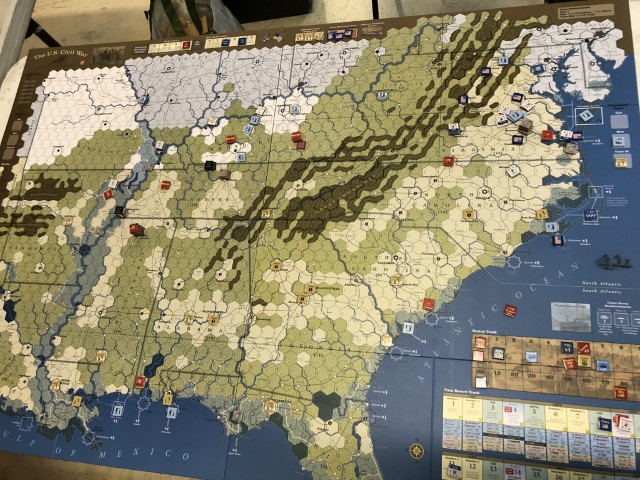 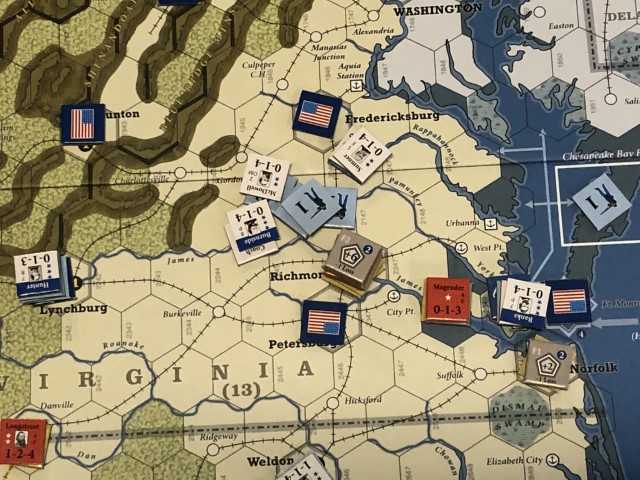 The rebs held out for the win as the Yankees couldn't catch up to the number of VP needed. The second pic shows the final failed attack on Richmond. It was a learning game, so the results aren't worth much. I'm pretty sure Will was hooked by the game, so a successful first day.

That evening I interviewed Trevor Bender. He's the designer of Kursk: The Tigers are Burning and was giving demos of his new North Africa game using the same system: 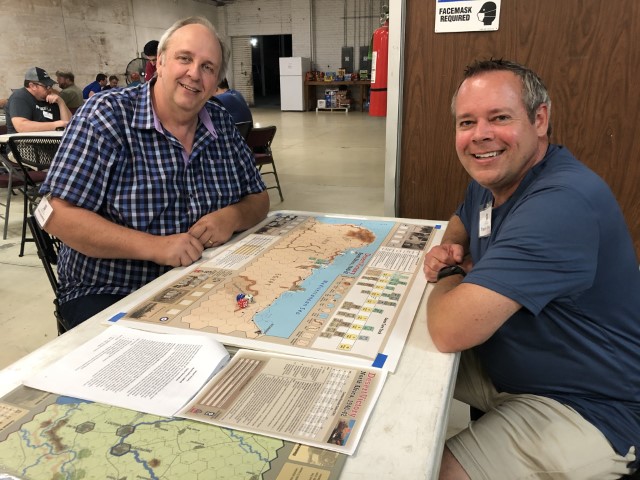 I didn't get a chance to play it, but given how much I enjoyed his previous game, I'm looking forward to this one in the next C3i magazine. May be out as eary as December? Fingers crossed.

Friday morning, I was scheduled to play with Harold Buchanan. But first I had another look around. 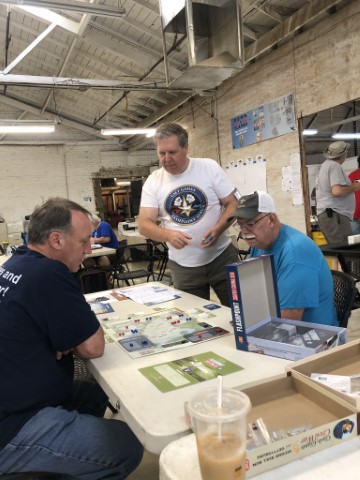 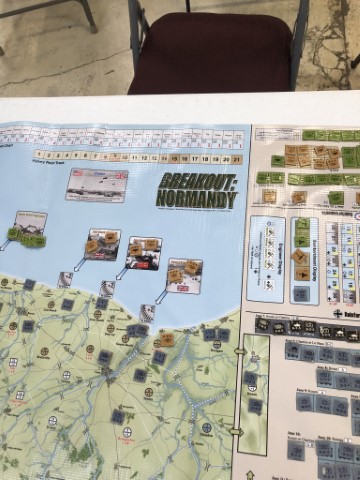 Very happy to see another oldie being played 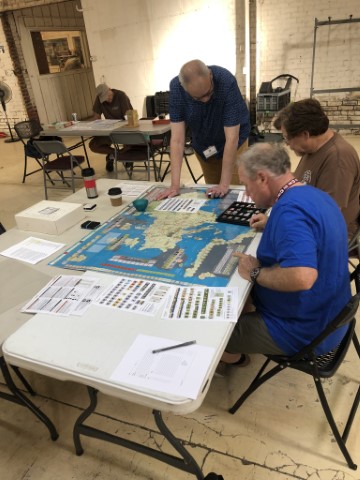 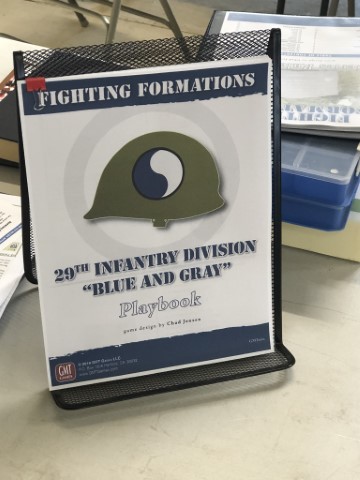 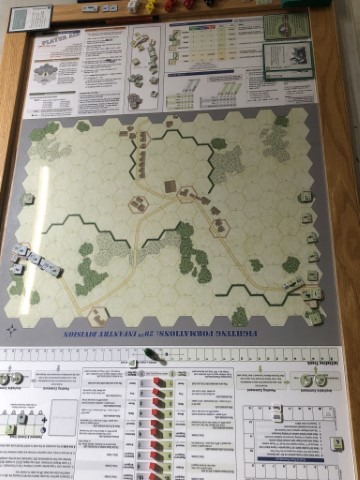 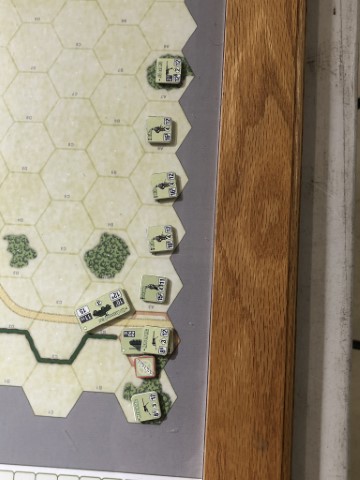 Kai Jensen was demoing her late husband's expansion for his Fighting Formation series which introduces the Americans into the game. I think this is already on P500. I also managed to sit down with Kai for an interview that I'll feature in a future podcast episode. Chad Jensen left behind a filing cabinet of designs in various states of completion that she's working through to see what's publishable. 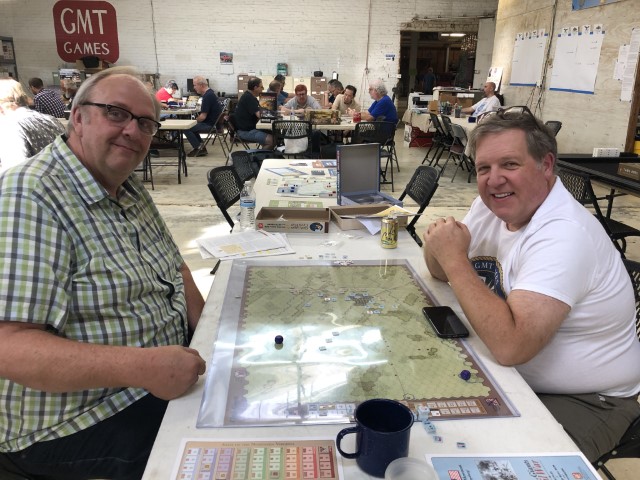 Harold and I finally got down to our game. We played Clash of Giants: Gettysburg by Ted Racier. Neither of us had played it before, but it's safe to say we both enjoyed it. Made me wonder why this system has died on the vine. I'd love to see other ACW battles using this. We had a lot of laughs, a great yak  over lunch, and Harold's northerners defeated me by the end of day two. Great fun. 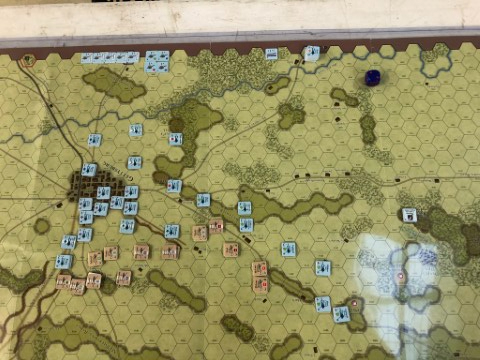 Near the end after I'd been pushed back.

After the game, I interviewed Steve Carey. He's the designer of the recent Blind Swords game from Revolution Games, A Greater Victory. Another one for the podcast. Great to talk to someone on the inside of one of my favourite systems.

To finish off the day, I met with Charles, another GMT West newbie. He'd been considering getting Washington's War, so we played a few turns with the copy I'd brought, and I think he enjoyed the game. 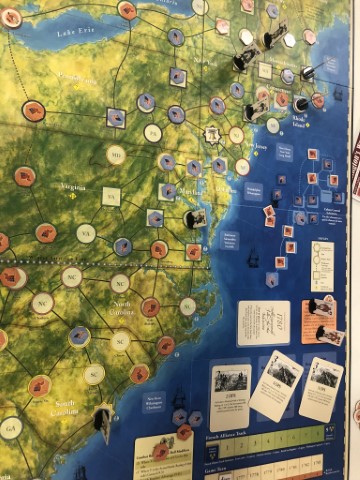 Saurday morning traditionally starts with a speech from GMT head Gene Billingsley, along with his introduction of designers and developers, and them then giving short updates of what they are working on. One that caught my ear was Jerry White of Atlantic Chase fame saying he was working something around the beginnings of submarines. If he does for subs what he did for naval games, we're in for something wildly new.

This was also when it was announced that we could shop the warehouse and take 50% off the retail price. I've already got a large closet of GMT games, but with that discount and no shipping, I picked up a few titles I'd been on the fence about:

Once the formalities were out of the way, I was invited to an 8 person game of Tank Duel, hosted by the designer, Mike Bertucelli: 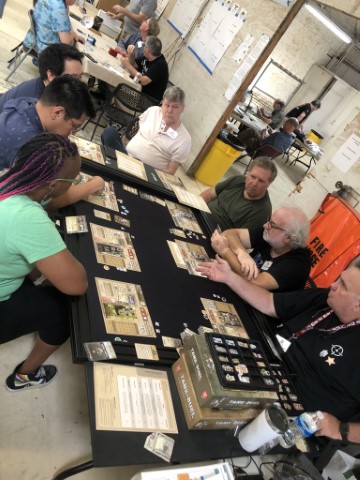 That's my empty spot on the bottom left of the photo. Beside me was my teammate Candice Harris of Youtube fame and some of her crew. We managed to blow Harold up twice.

Off for another ramble, I found some guys playing a totally tricked out copy of The Napoleonic Wars: 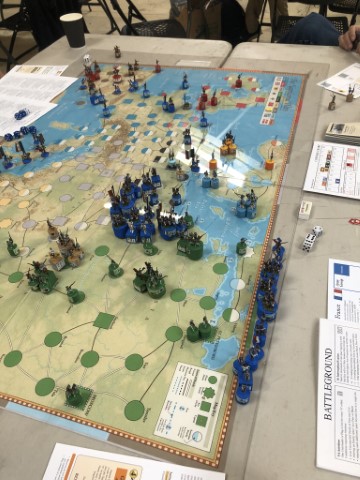 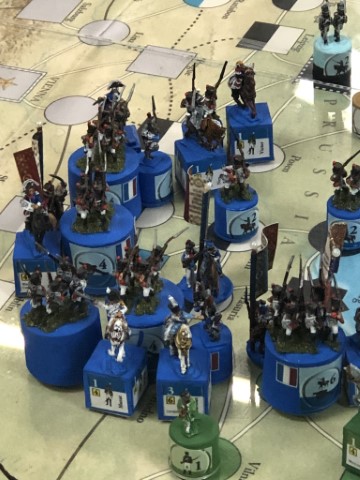 Then I ran into Charles again, and we decided to try Brief Border Wars (from Compass). The scenario was China vs Vietnam 1979. Neither of us had played it before, but with 4 pages of series rules and another 4 pages of scenario specific rules, we were going in no time. Game ended in a draw, but I think we both came away from it enjoying the system and finding it deeper than it appears at first look. Total time learning and playing was probably about 90 minutes. 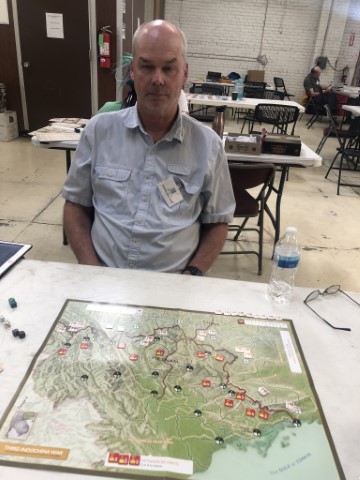 Then I had my interview with Kai Jensen. She's now working fulltime with GMT, assisting Tony Curtis on production, and also doing rules editing and layout. For another future podcast.

Had a great chat with David Siskin that made me want to come to the event every year, and then stopped by his group's table where they were playing their regular game of Barba*rossa, a mashup of anime art and an east front CDG. A lot of laughter: 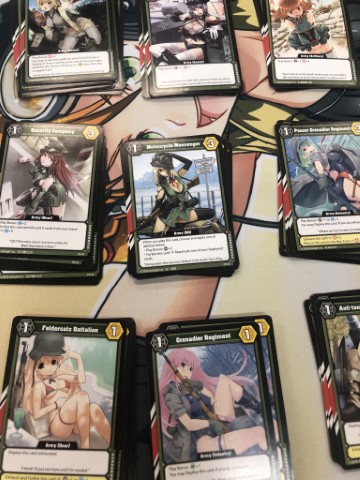 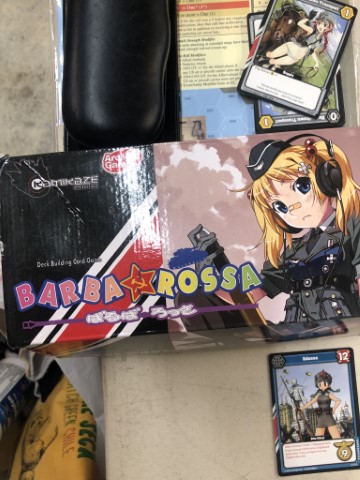 Sunday morning, I played Joshua in another game from Brief Border Wars, this time the Lebanon scenario. 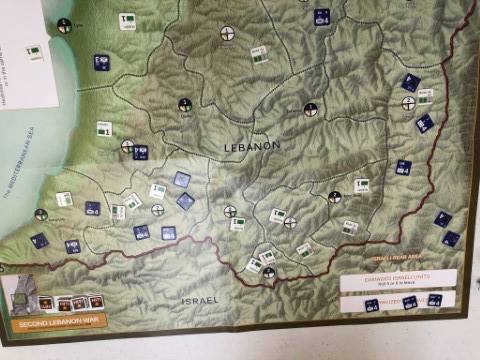 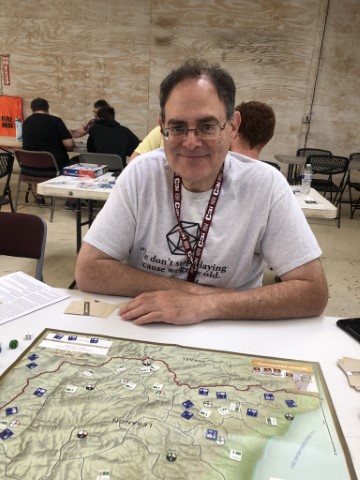 Another draw, and another great opponent. Thanks to Joshua for giving a ton of pre-convention pointers on what to expect.

I can't finish without mentioning the Down in Flames tournament that was going on all weekend (and apparently every Weekend at the Warehouse): 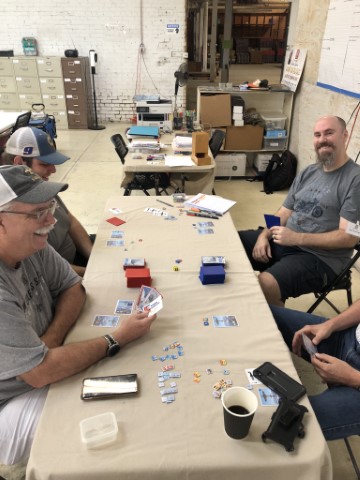 And finally, a couple shots of the actual warehouse space and all those stacks of games: 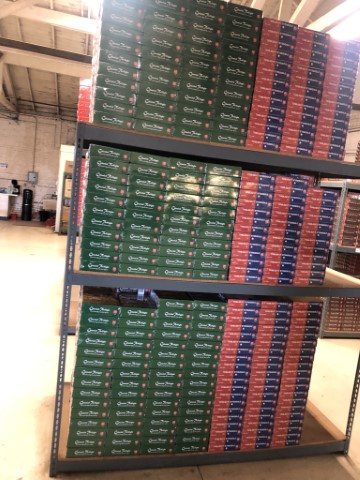 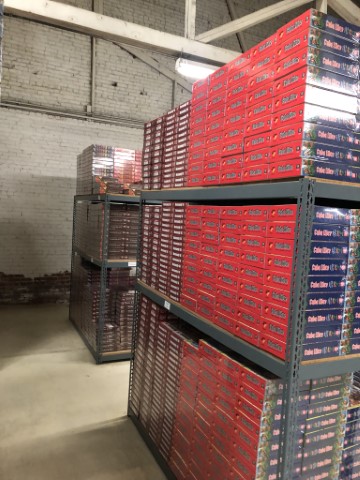 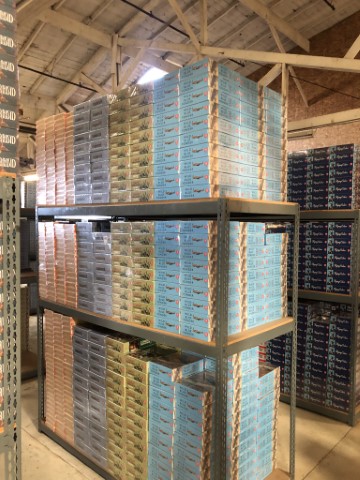 All in all, a great time. Who knows if I'll ever make it down again, but if the chance comes, I'll grab it. 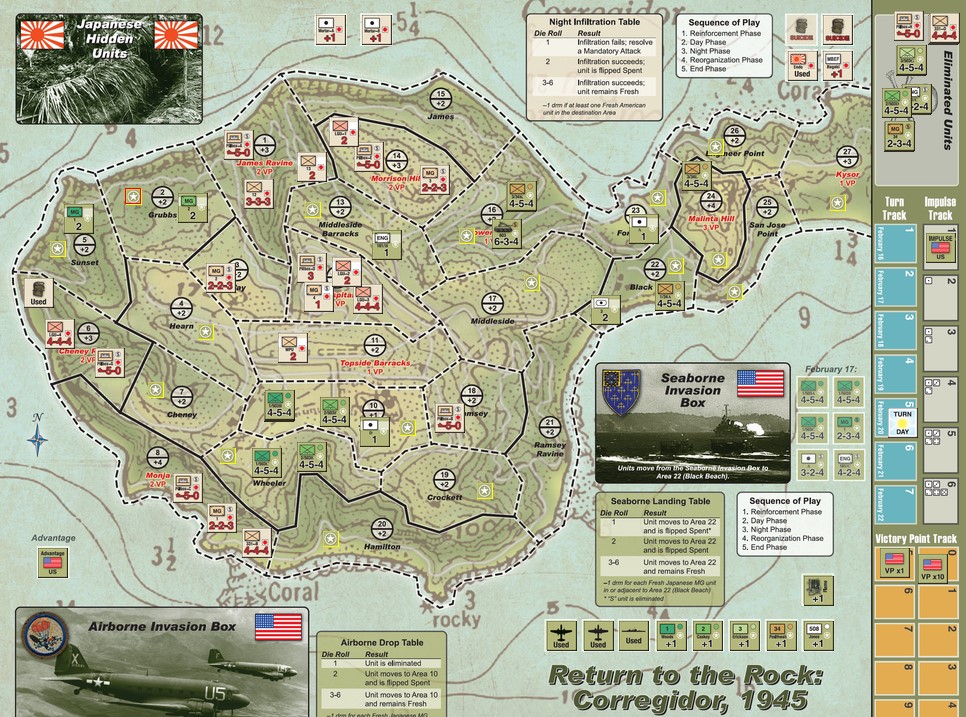